Click here if you wish to visit the Toy Story description page for screenshots and more information.

Score: C (3/5 )
We’re now at a time where mainstream animated movies are 3D and what was once risky is now a lucrative business strategy in the movie industry. With Disney films like Frozen and Tangled, Dreamworks films like Madagascar and Shrek, and Illumination Entertainment producing complete and utter excrement, it looks like 3D movies are here to stay; whilst destroying any chances of more 2D animated films…we kind of took it for granted, didn’t we? I know there are some hipsters who say that 2D animated films were better and 3D is over-saturated…they’re right and wrong but, that’s another story. Well, if you want to point fingers on who killed mainstream 2D animated films, then point the finger at Pixar and its first feature-length animated film, Toy Story. 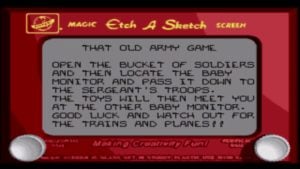 I have so many memories watching it all the time as a child. I remember having a VHS tape of it and I had a posh cardboard cover to put the tape in. It was navy blue and I don’t know if it was a limited edition…maybe it was. So for those who, for some reason, don’t know what the movie is about, it’s about a child named Andy and his toys that come to life when no one is around. His favourite toy is called Woody, a cowboy (and a friendly one at that). But on Andy’s birthday, he gets a Buzz Lightyear action figure, who ends up becoming a more favourable toy over Woody and so, overcome with jealousy, Woody tries to get rid of Buzz, but the plan goes wrong. I won’t spoil it any longer and you should see it, this is a game review after all (Yay filler). But it’s a great movie, as well as the other two sequels (that third one sure was a dark one wasn’t it?).
OK, onto the video game of Toy Story, and I’m taking a look at the Sega Mega Drive/Genesis version, developed by Traveller’s Tales and published by Disney Interactive Studios in the US and by Sega in Europe and was released in 1995 in the US and in 1996 in Europe.

So the game follows the movie, though there are some slight changes to make it an actual game. There are 18 levels in the game; I also say this because this version has the most levels, meaning that this port has more levels than the SNES or the Game Boy port. Anyway, you play as Woody near enough throughout the game. Some levels comprise of platforming stages, from helping the green army out of their bucket and dropping the baby monitor for them to reach it and then go to the other baby monitor, to simply racing against Buzz. There are also driving sections including the infamously difficult A Buzz Clip, where you have to run over Buzz ten times and collect the batteries, otherwise you’ll run out of power. I don’t know what people are saying, because I beat it on my first try, sure it had awkward controls, but it wasn’t that hard.

There’s one level where you walk around in a first-person maze like Wolfenstein 3D, you need to pick up aliens and put them back onto the play area. Huh, a first-person level, which is a surprise to see, especially for the Mega Drive, the closest we had to an entire game like this was Zero Tolerance and Brazilian Duke Nukem (Vindo obtenha algum). There are also bosses too but I’ll talk about those later. There’s an exclusive level for the Mega Drive, Day-Toy-Na, a driving game that’s similar to A Buzz Clip though not hard either; it also has the worst level design in the game.
Now I’m not particularly fond of the game, it’s decent and all and I think it’s aged OK but, not by much. But one thing’s for sure, it’s a hard game, very hard. If it isn’t the enemy placement or at times, head-scratching level design, it’s the bleeding bosses. Nightmare Buzz was OK, but it could be difficult to dodge Buzz’s laser beams at times, then there’s the battle against Buzz and that was annoying, then there is The Claw and that boss will be the end of you. You have to try to hit the claw with the aliens but, it’s highly finicky to do. Yeah, it might be a decent movie licensed game, but it’s a difficult one. I mean you could use a level skip cheat in the US version, instead of the password system in the European port…wait WHAT?  Yeah, for some reason, whilst the US version didn’t have a password system, the European version did, meaning that we may not have had a hard time with this game so long as you were rewarded with a password to continue on another day. 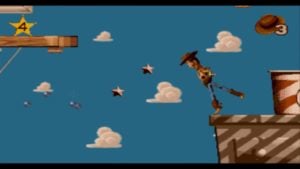 For graphics we have pre-rendered everything, and it’s not bad, even by today’s standards. It literally pushed the Mega Drive to its very limit and made the graphics the best it they could be for the system. The level design for some levels are just fantastic and look like the movie, though some levels, especially those that aren’t platform levels, haven’t aged well, especially the Day-Toy-Na level, which was horrendous. The level design for that level is blocky, messy and just plain ugly. Funny considering that this was an exclusive level, I wonder if it was rushed to be a ‘Sega’ exclusive? Then again, the level was also on PC. It’s also the first game I know where the Mega Drive, graphic-wise and to me, looks superior to the SNES version. Whilst the Mega Drive had fewer colours and the SNES had more colour, this somehow resulted in the Mega Drive having sharper graphics and the lack of colour, resulting in the Mega Drive port looking truer to the movie, which is a big plus in my book. The music is pretty good but you may get tired of the theme song playing in-between levels, in-game levels are OK and the tough levels can get intense.
Overall, Toy Story is an average game though I wouldn’t call it a bad movie licensed game, far from it, but its difficulty may put some kids off this, unless they had…DETERMINATION…sorry. As for me, I’m glad I played it but I wouldn’t play it again, it sadly doesn’t hold much interest to me. But if you like difficult games, then try this one out, or if you’re a hipster, destroy the cartridges as an act against 3D animation, but only the US version, leave the European version out of this, it has the password system.
You can get this on the Sega Mega Drive/Genesis, SNES, PC and Game Boy.
Rating: 3/5

For more great reviews by The Every Gamer, visit his blog at: https://everygamerreview.wordpress.com/