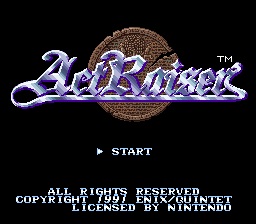 ActRaiser is a combination of classic platforming and city building with some RPG elements thrown in for good measure. Developed for the SNES by Quintet, Enix released this game in 1991 in North America. Players take on the role of The Master, a deity whose kingdom was usurped by his rival, Tanzra. After spending millennia healing from his battle with Tanzra, The Master is ready to slay his foe and bring order back to the world. ActRaiser features six areas that must be cleared of evil creatures so that human beings can once again live in them. To rebuild a land, players must first clear an action stage and defeat its boss as The Master. Finishing each act will free the human souls imprisoned by Tanzra and allow the Angel (The Master’s assistant) to direct the people in building their homes in SIM Mode. The Angel is also responsible for defending the towns you build from monsters. Once each town reaches a certain point in its development a new action stage will open up for The Master, which must be cleared in order to make each area truly safe. Both the Angel and The Master will grow more powerful and find new skills as the player advances. ActRaiser uses a battery save feature so the game can be continued.
Click the links below for more information.

Want to learn more about ActRaiser? Check out the following resources.